Friday, September 21st was officially the last day of summer 2012. You wouldn’t know it had you gone outside in Chicago though, as temperatures were in the 50s for most of the day and the skies were gray and rainy. Sometimes you just want one more warm and sunny day though, before it’s too late. In spite of the weather, life goes on and good things continue to happen in other aspects of our lives. A show where the bill is Atlas Genius, School of Seven Bells and Silversun Pickups sounds pretty dynamite, right? Well, that tour made its way to Chicago on Friday night, stopping at the Aragon Ballroom for some end of summer fun. Here’s a quick look at how things went.

Have you heard of Atlas Genius yet? If not, now’s probably the time to start paying attention to them. Their debut EP Through the Glass has already yielded a budding hit with the song “Trojans,” and a debut album is in the works for early 2013. As a band on the rise, of course they have to pay their dues, though fortunately for them that means playing at the Aragon to a couple thousand people rather than at a small club with only a couple hundred. The peril of being on a big tour though is always that you go on first, and with this being an all ages show, that meant hitting the stage at about 7pm. The average start time for a concert in Chicago is probably about 9pm, and even then a venue typically isn’t full until an hour or two later. So the Aragon was close to half full when Atlas Genius started their set, which for all practical purposes was pretty decent. They started with “Back Seat” off their EP and powered through a few new songs before very naturally ending with “Trojans.” They were arguably the most energetic and entertaining band of the entire night, playing with the sort of carefree joy that young and hungry artists have if they’re doing it right. Sometimes you will show up early and encounter a band that’s not quite ready for primetime but still has a little spark that suggests great potential for the future. In the relatively short time they’ve been around, Atlas Genius have exceeded reasonable expectations. They worked the crowd at the Aragon with charm and enthusiasm, and they responded in kind. It’s just a shame there weren’t more people around to witness it.

Buy the Through the Glass EP

One of the more fascinating dichotomies of this particular show was that while Atlas Genius has only one EP and a budding radio hit, School of Seven Bells have three full length albums and zero radio hits. In this increasingly digital and mp3 world, you’d think such stats wouldn’t mean much, but it turns out more young people are listening to terrestrial radio than you might think. There were large portions of the crowd that had at least heard of Atlas Genius but didn’t know School of Seven Bells. It created that much more of a challenge for SVIIB to win people over. The enthusiasm didn’t quite carry over into their set, and it didn’t help that they started a little shaky. “Windstorm” is actually a single of theirs and certainly isn’t one of their weaker tracks, but it trod a midtempo ground that left the audience at attention but not exactly inspired. That frontwoman Alejandra Deheza and guitarist Benjamin Curtis stayed pretty glued to one spot for the entire set certainly didn’t give you much to look at on stage either. I’ve seen SVIIB a couple times in the last few years, always at venues about a third the size of the Aragon, and those shows were far more visceral and inspired than what they were dishing out this particular Friday night. Perhaps it was the set list or the absence of Alejandra’s sister Claudia, or even the sheer size and poor sound of the venue that caused things to be off. Maybe they just needed some time to warm up, too. After the first few songs, things started to click in place by the time “Lafaye” hit. Their final few songs were more beat-heavy and pulsated with an intense energy that started to get a lot of heads bobbing in the crowd. They finished with the song “Half Asleep,” their only nod to their excellent debut album Alpinisms, and there was a certain irony to the title. After spending much of the set with a positively lethargic audience, they were finally able to bring many out of that comatose state and into semi-consciousness. So they had that going for them, which was nice. 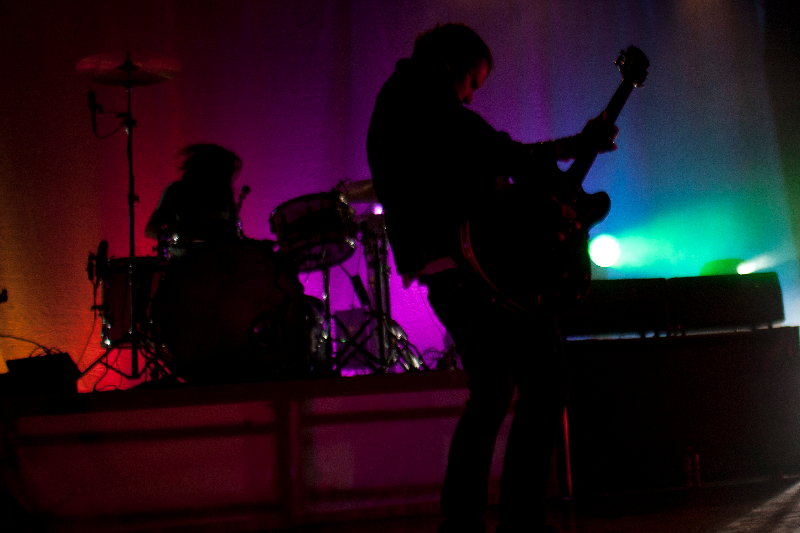 When it comes to headliner status, the conditions are almost always just right. That is, the place is fully packed and there’s one act you know everybody is there to see. In this case it was Silversun Pickups, who like School of Seven Bells have three records to their name, but unlike School of Seven Bells have a handful of radio hits to back them up. If you haven’t heard songs like “Lazy Eye” or “Panic Switch” on your local radio station, then perhaps you heard them in a TV commercial or on a movie soundtrack, because they’ve kind of been everywhere. Back when they were first starting out, people compared them to the ’90s version of The Smashing Pumpkins, reasoning that if Billy Corgan hadn’t strayed from that path he was on to go more psychedelic it’s what the Pumpkins would sound like today. Considering how successful Silversun Pickups have been thus far, such a reference feels pretty apt. The size of the crowd on Friday night seemed to be a testament to that success too, because if the show wasn’t sold out it sure looked like a sell out. Frontman Brian Aubert marveled at how many people came out, particularly because the last time they played the Aragon it was only about 75% filled. That sort of humility and overall kindness towards the crowd actually went a long way as a counterbalance to the ferocity of their songs. With bassist Nikki Monninger sidelined for the moment while she’s pregnant with twins, Sarah Negahdari from The Happy Hollows filled in for what was her very first time in Chicago. That seemed strange to me because I thought The Happy Hollows have toured nationally at least a couple times in recent years, but whatever, she seemed genuinely excited to be there and the crowd made her feel more than welcome. After starting with the opening track “Skin Graph” off their new record Neck of the Woods, the band peppered much of their set with the hits people clearly wanted to hear. “The Royal We,” “Little Lover’s So Polite” and their latest single “Bloody Mary (Nerve Endings)” all showed up early on, quickly driving the crowd into a frenzy. Aubert moved around the stage with his guitar whenever he wasn’t locked behind a microphone, which also lent the show some extra energy that a rather pretty array of rainbow colored lighting couldn’t otherwise do. Overall it was about what you’d expect from a Silversun Pickups live show, and that’s not a bad thing. Better to meet expectations rather than fall short of them. The band has definitely improved with time, and Aubert has grown as a performer and ringleader too. Of course there’s always room for improvement, but for where they are in their careers right now they’re doing just fine on stage. Nobody walked out of the Aragon at the end of the night disappointed. Even the rain had the good sense to go away.

Buy Neck of the Woods from Amazon