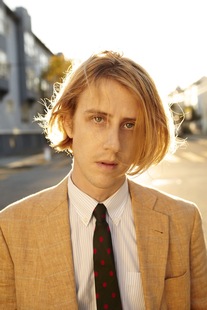 The evolution of Christopher Owens has been interesting and strange when you really think about it. Everyone likes to mention the time he spent growing up in a cult, probably because it makes for an interesting back story to the music that his band Girls would go on to make. Across two full lengths and an EP, the way that band transitioned from breezy and brash drug-fueled pop to psychedelic and hazy Pink Floydian pop was a thing of beauty. It gave off the impression that while there were other members of Girls, Owens really came into his own as a frontman during those formative years and distinguished himself among his peers. When Owens suddenly announced he was leaving the band in mid-2012, the main question everyone asked was why, because they had become so successful and respected. Subsequently and in promotion for his debut solo album Lysandre, the explanation becomes much clearer: there were no other permanent members of Girls besides JR White, and the revolving door of musicians was exactly what Owens didn’t want Girls to be. Better to make a record on your own the way you want to make it, and then play it live with a backing band that’s not expected to be anything more. So now more in control of his career than ever before, Owens continues to dream big from a conceptual standpoint while going a bit smaller when it comes to the music itself.

Lysandre is a smartly written and composed album that pretty much details the ups and downs of a relationship he had during the early days of Girls. He focused almost exclusively on women throughout Girls’ catalogue, so it’s no surprise that theme continues on his first solo record. Yet unlike songs about “Laura” and “Lauren Marie” and “Myrna” and “Jamie Marie,” this is an album about one person in particular, given the name Lysandre to protect the innocent. It’s also a very sonically linked record that rewards those that pay close attention from start to finish. “Lysandre’s Theme” is the :38 introduction to the album, and that melody pops up again in almost every other song that follows. The repetition stays with you, even as all the other parts around it move in unfamiliar and different directions.

Speaking of different directions, it’s understandable that Owens might want to distance himself from the scrappy prog/psych-rock sound of Girls, which is perhaps why this album presents a shift towards more acoustic and spare arrangements to create simplistic pop songs and ballads. You get a song like “Here We Go,” which starts off very lush and beautiful with an acoustic guitar and Owens staying so calm his vocals are almost a whisper. Lovely as it is, about halfway through a flute enters the mix and flutters around the melody in a very distracting way. It’s enough to pull you out of the song and make you question why it needs to be there at all. The same can be said for a saxophone on “New York City,” a startlingly cheery pop song whose lyrics are about desperation, poverty, drugs and violence – basically the antithesis of what it sounds like. It’d be one thing if the track was a sly attempt at subversive humor, but there’s no indication Owens is having a laugh or trying to be ironic, which in turn takes away any meaningful points trying to be made. In the end it just feels a little uncomfortable. Of course nothing quite compares to “Riviera Rock,” the strange reggae instrumental that sits at the center of the album and comes off like a cross between elevator muzak and the intermission music they used to play when they took breaks in the middle of movies. It’s the album’s true WTF moment, and likely only exists to help pad out the album’s run time, which wraps up at an extremely lean 28 minutes.

For the handful of faults that Lysandre has, there’s also a handful of very good things to help balance them out. Unlike the poorly managed mixing of “Here We Go,” “A Broken Heart” actually manages to pull off an acoustic ballad complete with a flute that doesn’t sound overbearing or enters the song from out of nowhere. Owens’ vocal also hits on just the right amount of tenderness and vulnerability that’s required for the subject matter at hand. The bouncy and fun “Here We Go Again” doesn’t make any real missteps either, and is a great reminder that Owens is still happy to write pop songs in the vein of some of Girls’ best like “Lust for Life” and “Honey Bunny.” The second half of the album is actually quite strong on the whole, and moments like “Love Is in the Ear of the Listener,” “Everywhere You Knew” and “Part of Me (Lysandre’s Epilogue)” are very grounded and connect on their themes of unease, depression and ultimately acceptance with a strong dose of resolve.

When you really think about the good vs. the bad on Lysandre, along with its length, it becomes apparent that Owens would have been smarter to have just released this as a 5-6 song EP rather than a full length album. It would have been a whole lot stronger in that compact arrangement with all the fat trimmed out of it. Yet there’s still something admirable about how Owens treats this record as more of a sounding board than something he’s deadly serious about. His goal was to separate himself from the work he’d done previously in Girls and try to string together some intelligently crafted song experiments in the form of a concept album. In those things he succeeded. While it may alienate some and disappoint others, it’s important to recognize that he’s still trying to find his own voice and sound, and those growing pains might take a bit. Don’t worry though, because Owens has made it clear he’s not going anywhere or plans to stop making music any time soon. With that in mind, it’s likely Lysandre will be seen as a brief detour on his path towards greatness.