Album Review: Mogwai – Hardcore Will Never Die, But You Will [Sub Pop/Rock Action] 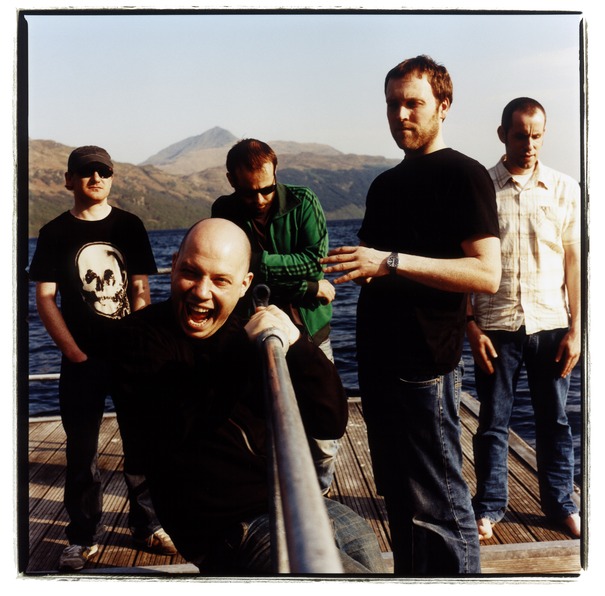 It’s still very early in 2011, but I’ll put down money right now that no band comes up with a better album title this year than “Hardcore Will Never Die, But You Will”. That’s what Mogwai titled their seventh album, and when you’ve been making people’s ears bleed profusely the last 15 years with your excruciatingly loud rock music, that’s a title you earn. Yes, this band has been making post-rock music since the time that post-rock probably wasn’t even a term. They’re one of the originators of the genre, and it’s appropriate that they burst onto the scene with their best and most exciting record in the form of 1997’s “Young Team”. Mogwai are also the sort of band that profusely divides music lovers, some view their songs as noise for noise’s sake, while others studiously analyze each composition for the peaks and valleys and undulating beauty of it all. The thing about being around for so long and putting out so many albums though is that you can’t keep doing the same things over and over again. Like any good band, changing up your sound and trying new things is imperative to your survival. Mogwai’s first album was so raw and ferociously loud that it metaphorically scorched the Earth. Since then, they’ve gotten quieter and more studious, pushing for greater beauty in their tracks. The last couple records sounded more like a band on their last legs, tired and worn out and punching those chords in without too much emotion. Yet a song like “The Sun Smells Too Loud”, off 2008’s “The Hawk Is Howling” still broke into new territory by putting away a lot of the guitars in favor of keyboards, synths and a drum machine. It was the singularly arresting moment on an otherwise mediocre effort, but it left the door open to some ways they might be able to break their sound through to the next level.

Instead of taking that leap forwards to where they need to go, Mogwai instead chose to look to their past for “Hardcore Will Never Die, But You Will”. They reconnected with “Young Team” producer Paul Savage, likely in the hopes that he would drag out the spark that he first saw in a very young group of guys from Glasgow. The good news is that Savage seems to have brought the band out of the funk they’d been in the last two records, because in listening to the new album you come away with the impression that they’re re-energized and enjoy making music again. As for the songs themselves, well, a bit of restored energy can only take you so far; creativity and innovation have to take you the rest of the way. Opening track “White Noise” marks perhaps the most lackluster start to a Mogwai album ever, but that doesn’t mean the song is necessarily bad. It’s graceful and lovely and embraces you with some soft piano while resisting some of the post-rock cliches of slowly building to a loud guitar peak. The restraint shown is admirable, even if it doesn’t get you fired up for the other songs to come. And as a continued sign of progression, “Mexican Grand Prix” is all synths, keyboards, bass and drum machines in what amounts to a dark electro-inspired cut. There’s a strong 80s influence that might bring to mind a band like Neu! or Kraftwerk with a more modern M83-like twist. It sounds almost nothing like the Mogwai we’re familiar with and that’s one of the big reasons why it’s one of the record’s strongest efforts. If only they’d do more of it. Fuzzed out electric guitars are the very first things that seduce you into “Rano Pano”, and they pretty much stay that way as other small bits and pieces come together to create a wall of sound that’s pretty much become a band standard by now. There is a moment though, with about 90 seconds left in the track that the volume level escalates from 2 to 10 in an instant that comes across as something invigorating and visceral like many of Mogwai’s earliest material. Unfortunately that’s just a few moments on an otherwise very autopiloted song.

The way that the guitars, synths and piano all interact on “Death Rays” turns it into a shimmering and soaring spectacle better than Mogwai has done in several years. It’s another one of those restrained moments where the band takes a subdued melody and makes it their own in the best sort of way. The buzzsaw electric guitar that cuts through the fray in the last couple minutes is also one of the best riffs they’ve cranked out in a short while. Things get back to “rocking out” mode again with “San Pedro”, yet another bit of normalcy for Mogwai, though with the added benefit of sounding just a touch more raw and energized than much of what was on their last album. Or it could just be that it sounds more white hot than usual because of the quieter, more beautiful moments it’s surrounded by. The grand piano and splashes of keyboard on “Letters to the Metro” give the track a very soulful base along with emotional resonance that is sad but cathartic. Mogwai likes to use distortion on their vocals when they have them on a track, and they break out the Autotune for “George Square Thatcher Death Party”. The guitars may be mixed pretty significantly into the song, but they’re the least important part of it next to that pitch-shifted singing and smartly used synths. The way that “How to Be A Werewolf” calmly moves from subdued synths to a really sharp rock song feels completely earned over its 6 minutes. The band doesn’t blind or deafen you with pure noise but instead relies on strong melody amidst the heavier guitars. The way they squirm and slide rather than simply attack head on shows that Mogwai has learned a thing or two in their somewhat lengthy careers. “Too Raging to Cheers” is one of the more lackluster efforts on the album, notable really only for the small dose of violin that shows up all too briefly for a few moments. But what would a Mogwai album be without an epic closer? “You’re Lionel Richie” is 8.5 minutes of what this band does best, which is lull you into a false sense of relaxed beauty before pulling the rug out from underneath you with a wall of heavy guitars. It’s a dirge that likely hopes you’ll recall similar death marches “Like Herod” or “Mogwai Fear Satan”, the only thing is this one’s not quite up to that level of brilliance. Even if it were, there’s the whole “done it all before” aspect that would lessen its overall impact anyways. Just because the song isn’t among Mogwai’s 5 best doesn’t mean it’s still not good though. There’s plenty to like about it, and in terms of a way to wrap up the record nothing else seems as fitting.

“Hardcore Will Never Die, But You Will” may not be the greatest Mogwai record, but it is a very exciting one. The band seems more awake and aware of their history and are trying to move in a direction that both honors that and also progresses forwards. The increased use of piano and synths on many tracks breaks out some different sounds and tempos as the band holds back on a number of peaks and valleys they’d normally traverse with the quiet-loud-quiet dynamic of electric guitars. This is engaging material despite the subdued nature of it all, though some will argue that it’s just a bit boring. At the very least it’s better than what they’ve been doing, essentially stuck and running in place on their last couple efforts. There are a couple songs on this album that either don’t quite live up to their potential or slide backwards into the same tropes that have become old hat by now, but for the most part Mogwai is in a better place than they were two or three years ago. Hopefully these new, less heavy compositions don’t do much to change the intensity of their live shows, which is the best thing about the band. Apparently so is producer Paul Savage. We can’t quite roll out the “Welcome Back” banners for these guys just yet, but if they keep steady on the path they’ve started anew here, Mogwai could very well be rising from the ashes within a few years. Maybe there is a chance they’ll make that genre-defining album before they reach an expiration date.

Buy “Hardcore Will Never Die, But You Will” from Amazon