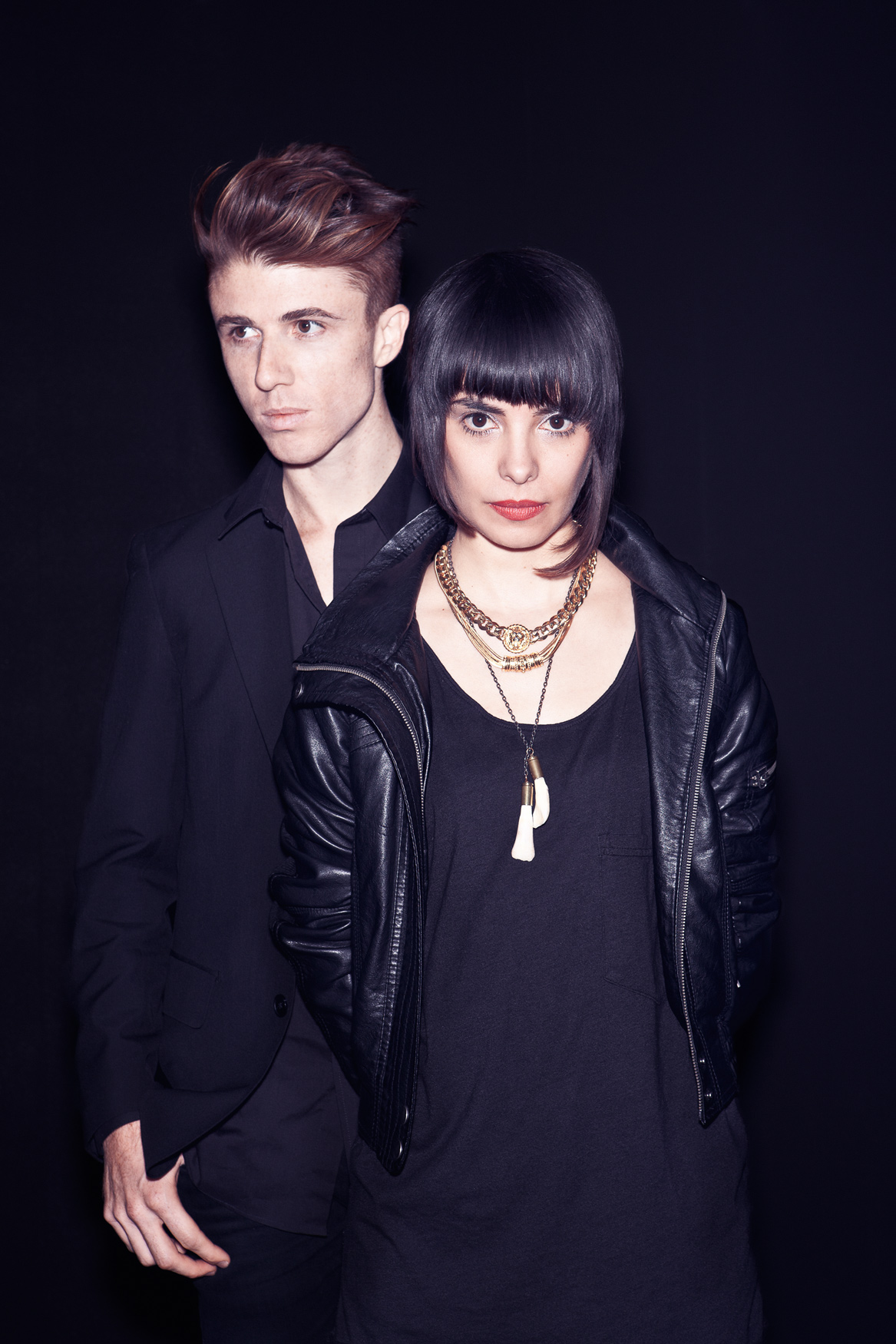 One of the first things you’ll hear mentioned in any press about School of Seven Bells surrounding their new album Ghostory is that they’re down a member. After two albums as a trio of Benjamin Curtis (ex-Secret Machines), Alejandra Deheza and Claudia Deheza (ex-On!Air!Library!), Claudia abruptly left the band in the middle of a 2010 tour suporting their last full length Disconnect From Desire. There was no official explanation given for her exit, but it’s very possible that the romantic relationship between Benjamin and Alejandra left Claudia feeling like a third wheel both personally and professionally. Soldiering on without her certainly leaves a twin-sized hole in the band’s sound, as the intertwining vocal harmonies of the two sisters were one of SVIIB’s defining characteristics. As a means of offsetting such changes, the duo uses vocal overdubs and multitracking to keep things stable, even as the overall style of their music continues to evolve as well.

Ghostory is at its core a concept album, though you might be wise to simply take it at face value rather than closely analyze plot and characters. As the album’s title suggests, there are plenty of ghosts floating around in these songs, and they haunt the main character of Lafaye in both a positive and negative way. They aren’t literal ghosts but figurative ones, as our memories of people and places and strong emotional events can stay with us and haunt us for much of our lives. It shouldn’t come as much of a surprise that many of the songs are thematically dark, about predators and toxic people that we’ve all mistakenly become friends or lovers with at times. Our judgments are not always perfect. “Low Times” feels fitting as the album’s 6.5 minute centerpiece, an insistent and rather bitter track that pushes back against a particularly bad break-up. Similar themes permeate much of the record, though none perhaps moreso than “Scavenger”, where Deheza angrily criticizes her ex with lines like, “I made you feel something because you could feel nothing.” And though it is never officially spelled out for you, a couple tracks are informed or at least partly influenced by Claudia’s departure from the band. Listening to opening track and first single “The Night”, lyrics such as “The light of day gives me no relief/because I see you in everything” and “You have my arms, you have my legs” seem to reference the physical and mental connections that twins share. Press materials for the album mention that Ghostory is as much about Lafaye’s journey as it is the band’s, so of course making such connections are about as obvious as they can get without somebody spelling it out for you.

As much as SVIIB’s journey the last couple years has been about loss, listening to Ghostory you understand it has also been about growth and strengthening perceived weaknesses. Somehow they seem to have gotten better in spite of everything, as the new album is their most cohesive and exploratory to date. Their first two records Alpinisms and Disconnect From Desire took on gothic synth-pop with the sort of vigor reserved for a band like Depeche Mode in their heyday while also drawing accurate references to shoegaze and My Bloody Valentine. There’s still a lot of that on the new album, but they’re also bringing in a heavier electronica influence to make their songs more beat-heavy and dancefloor ready. The choruses and hooks are better than ever too. If you thought SVIIB’s music was ripe for clubs before, don’t be surprised if they recruit some friends and unleash a remix record several months or a year down the road. Tracks like “White Wind” and “Lafaye” are just two standout moments of a handful best experienced in a dark room with a pulsating light show and bodies writhing up against one another. But in case all of that wasn’t enough, Ghostory wraps up with “When You Sing”, an 8.5 minute thrill ride that stands right next to the even longer “Sempiternal-Amaranth” from Alpinisms as a band-defining moment. Whether their songs are 3 minutes or 10, School of Seven Bells are always careful to not let a melody go beyond its expiration date.

2008 was the year School of Seven Bells toured with M83. The two bands shared something of a sonic bond then, and now a few years later they have even more in common. There are moments on Ghostory that would be right at home on M83’s highly acclaimed 2011 double album Hurry Up, We’re Dreaming, and vice versa. That says something about the evolution of both bands. Heavy reliance on shoegaze textures and hazy vocal performances/lyrics have given way to extremely clean production, up-front and clear vocals, along with a greater openness and warmth to the lyrics than ever before. The fog is gone and we’re now left with the realization there was an even greater band being obscured by it. In spite of all they’ve been through the last couple years, SVIIB are blossoming rather than retreating. They’ve always been meticulous in crafting their songs, but Ghostory is the first time that Benjamin and Alejandra have truly collaborated in the writing and composition of a record – something they used to do separately. The results are right there across 9 beautiful and darkly fun tracks that function best as a defining statement of what this band is all about. Hopefully working their magic and putting out this excellent third record won’t come back to haunt them when they try to settle in and make a fourth.